Whether you are building a new friendship online or are collaborating with someone for work, or evaluating fake news and political posts, or have been a target of cyber stalking and bullying, it is important sometimes to know how to find out if a Facebook profile, in question, is fake. 5.4 billion Facebook fake accounts were removed in 2019, and though Facebook has checks like email ID and phone number, in the absence of requiring any government registered ID proof, the problem of fake profiles runs unchecked and unabated still.

Must visit: How To Know Who Unfriended You On Facebook

Hence, one has to use certain tricks and techniques to find out if a Facebook profile, they are interacting with, is fake. Catfishing on the internet is not an unknown practice. It has existed for as long as the Internet, or more precisely, social media has existed. Someone pretends to assume the identity of another person, and pretends they are another person, by that fake profile. 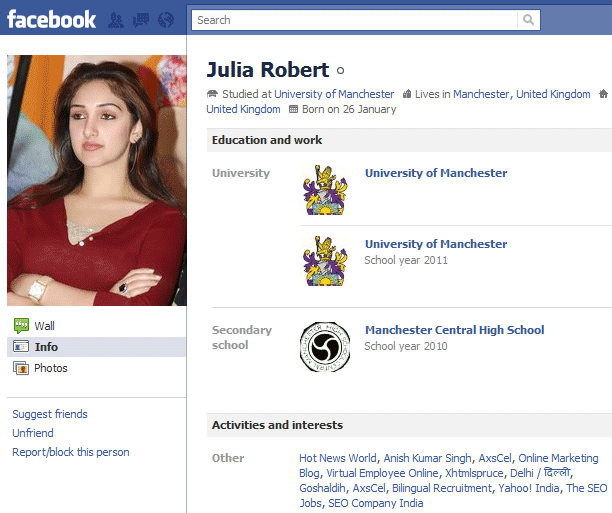 How to Find out if a Facebook profile is fake

Well, how to know that the profile, on the other end, is real, and you’re not being lured into fictitious friendships and relationships with fictitious online persona. Here’s how to find out if a Facebook profile is fake:

Are their names the name of some popular author? Or, some fictional character, or experts even go a step higher when they combine the names of two popular people, to come up with one. If their Facebook names resemble that of famous people, it could be a very big indication that the profile you’re interacting with is fake.

Are there no cover pictures, or profile pictures of the person? Usually, too less pictures indicate that either the fake person is using someone else’s pictures they have downloaded from some source, or they are using pictures found on the internet, to pretend to be someone they are not.

If their social media activity is sporadic, and they had last posted three years ago, and since then the profile has no activity, it is time to raise an alarm. Facebook users usually update more information, and a little more frequently, and hence it is not very hard to find out fake profiles on Facebook.

If the profile isn’t fake, and if it is a legitimate person, chances are they will have tagged pictures, and quite a lot of them. If they have no tagged pictures by other legitimate profiles, chances are they are maintaining a fake profile, and you should report their profile and block them, for your security reasons. Don’t risk your safety by interacting with a fake profile. They might not be dangerous per se, but if they hack other personal information, though highly unlikely, it could create a problem for you.

Check their Facebook URL with their Facebook name. Are the two different? Then, there you have a fake account. The reasons this happens is because a real profile was being hacked, or left unused and the owner of the fake account is currently using for duplicitous content. It also happens, when the fake profile in question was being used previously for something different purpose, and is now being utilized for another reason.

Most fake account owners are lazy, so they would provide similar information and not do their research. Someone living in New York City would also be from NY City, who would be working at New York University. This is a pattern that in most cases, it’s a fake profile. In reality, people update more specific details about themselves. Fake account creators usually use the names of popular places, and popular companies so that they are familiar with accounts they are targeting. This can be an initial indicator as to why the profile looks so generic, because if it does, it is probably fake!

The reason we ask you to check friend list, or people who have interacted and reacted to their posts, is because it might help you to figure if the present is a fake profile. They can be a part of many fake profiles, a group of such fake profiles existing, commenting and sharing each other’s posts to give the impression of real connection. Or, you might notice that though this person is African, his friends are called middle-east oriented, which is not such a common occurrence and must raise eyebrows! It might have so happened that the account was used prior by someone in Middle East, and has now been hacked.

It so can be that their friend list is not open for public preview, but then you can check their previous check-ins, if their location and the information they have provided, matches. Moreover, what goes a long way is doing a simple google search on person, as if the person is valid, they would have other social media handles, probably connected and you’d be able to verify they are real.